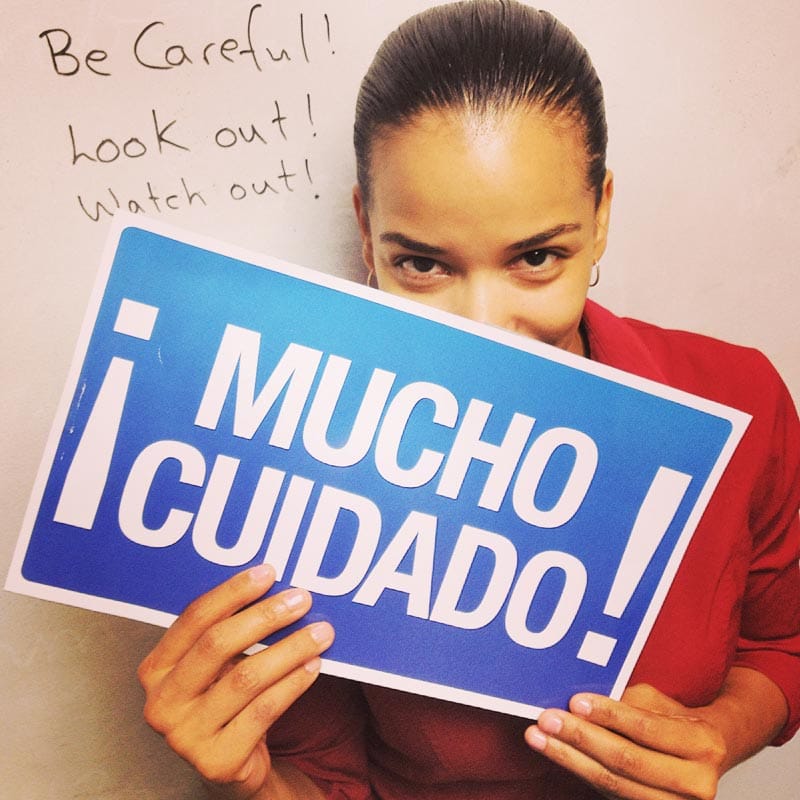 If you answered “no” or “I don’t understand what that means,” it’s probably time to start studying Spanish. If you did understand the question, but didn’t feel comfortable with your ability to continue the conversation, then it’s time to improve your knowledge of Spanish.

You can’t escape the fact that if you live in Miami your life can improve by understanding the “locals” language. Before I give you the top five reasons to study Spanish in Miami, l’d like to give you a fact about the Spanish language in Miami.

In many areas of Miami, Spanish is the go-to language. It is easier to quantify the number of people who don’t speak Spanish.

According to the 2006 census, only 27.2% of Miami residents speak only English. Granted, some of the remaining 72.8% speak Creole or another language, but a great deal speak Spanish.

So, you have two options.  First, you could ignore this fact and try to teach the whole city English (believe me, I have tried.) Second, you can take the chance to learn the language.  Even knowing just a little Spanish can make a big difference in the metropolis that we call Miami.

Whether you are planning on putting down roots in Miami or just using it as a springboard to your next destination, learning Spanish can be a lifelong treasure, for a myriad of reasons.

Reasons to study Spanish in Miami

Although we each have our own reasons to study Spanish, here are some of the top reasons that I hear from students and locals alike:

1. Communicate with the locals.

Like it or not, most people in Miami are bilingual, at minimum.  With one of the highest immigrants populations in the country, you will often hear Spanish being spoken at social and work events, restaurants, bars, shops, and on the street.  Try ordering a cafecito in Little Havana, Kendall, or Downtown Miami and see how far you get without at least attempting the right accent. Sure, you’ll probably get what you want, but wouldn’t it be nicer to try it in Spanish?  After all, a cafecito or cortadito is more than just a caffeine boost for many.  It’s part of a culture, a way of life. Without speaking the language one can only watch passively.

2. Communicate with the world.

For many who live in New York, Chicago, or really anywhere up north, visiting the Caribbean, Central America, or South America is nothing more than a wish.  For us in Miami it’s only a short plane ride. By short, I mean forty-five minutes.  Think about that. In forty-five short minutes you could be touching down in Havana, Cuba which was only recently okayed for American tourists. Alright, Cuba is not your thing, so how about Peru, Argentina, Mexico, Colombia…..?  The list goes on and on. Speaking Spanish will enhance any travel experience south of the border.

According to the 2007 census, 60.5% of companies in Miami are hispanic owned. You might not need to speak Spanish in order to work at all of these companies, but I am sure it wouldn’t hurt. Miami is sometimes referred to as the capital of Latin America, not without reason. Many Latin American companies set up shop in Miami as an entryway into the USA and vice versa for US based companies looking to break into Latin America.  All of this spells J-O-B  O-P-P-O-R-T-U-N-I-T-Y for bilingual candidates.  Do you want in on this?  Then learn Spanish!

I bet you didn’t know that the United States does not have an official language. Yes, that’s right.  English is not the official language of the USA. So, now it goes beyond Miami.  Chances are you may not stay in Miami forever so why not learn a skill that you can take along for the ride? Spanish is a highly sought after skill in all US job markets.  According to a 2012 survey conducted by the U.S. Census Bureau, Spanish is the primary language spoken at home by 38.3 million people aged five or older. Taking this even further abroad one can see that the Brits now prefer to learn Spanish, not French, in schools.  If you have gotten this far, then it is fair to say that you are probably an open minded individual ~ open to new things.  So, make the most of this change. Study Spanish!

Why stop learning just because you have graduated university? Life goes on. Shouldn’t you? There are many reasons to keep improving yourself apart from the obvious ones stated above.  Learning a language can help you stay sharp, both now and in old age. If you don’t believe me, research the effects of bilingualism and old age in studies presented at the 2011 meeting of the American Association for the Advancement of Science. To summarize them, being bilingual is good. It doesn’t stop there. Acquiring a new language is difficult, but learning the discipline required is often as rewarding as the results. Bilingual people are often able to solve problems quicker, switch from task to task more easily, and overall have a greater command of their native vocabulary.

People choose to learn Spanish for many reasons.  What’s yours?

Contact us to find out how to begin learning Spanish. Our Spanish classes are designed to meet the specific goals and needs of each learner. Whether it be for personal, academic, or professional reasons we are here to help you learn a new language.

Why wait?  Stop dreaming, start doing.  Let us know if you have any questions, and don’t forget to subscribe to our blog or follow us on social media. Turn your Language On!