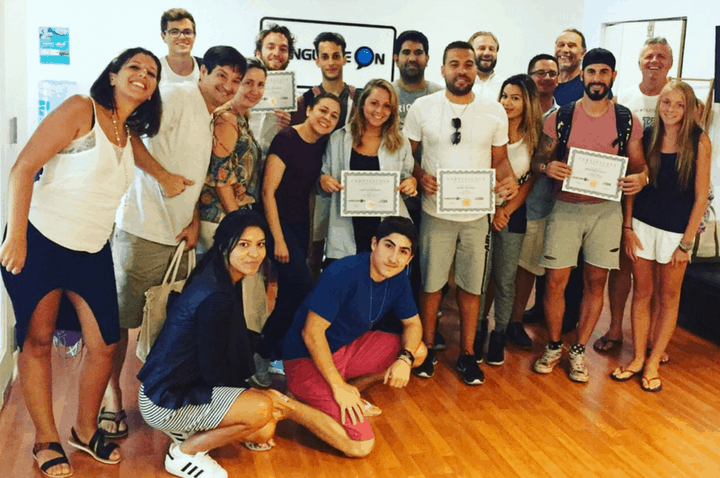 Hi, my name is Eric and I am an English teacher and accent reduction coach at Language On. My students always ask me, “How can I speak English perfectly?” My initial reaction is always, “What’s perfect?” But let’s leave that for another day. Today, I want to share with a you a few thoughts and suggestions to help you better understand language and give you some insight to how you can change your accent. Keep reading to find out how you can speak English “perfectly” by learning how to create native-like speech patterns and sounds and begin reducing your accent. By changing the way you speak you might even discover a whole new person or create a brand new identity. Are you ready?

How We Learn a Language

Learning a language when one is two years old is the norm or course.  The educator, Maria Montessori, called this the sensitive period of language.  At that age, our brain is like a sponge, soaking up all the sights and sounds that form our understanding of the world.

This is not the case after one is aged 5 or beyond.  The ease with which we learn gradually disappears and new languages and their sounds, in particular, become harder as we get older.  For the most part, this has to do with natural physiological changes, habit-reinforcement and the fact that we have much more to be concerned about in life as we get older, besides studying the facial patterns of mom as she speaks and the resulting behavior and actions that are associated with what has been said.

Okay it’s harder now.   But clearly it’s not impossible, as people all over the world pick up languages –  like it’s going to the gym.  It’s a normal activity in many parts of the world and it’s no big deal for those who have the luxury and opportunity to develop themselves into global citizens… which describes a great percentage of younger people today, many of whom have travelled around the world already by the time they arrive to study at Language On English Schools.

And the key to refining one’s language fluency with appropriate vocabulary is simply desire, as you probably know.  The desire to spend the time it takes to learn the verbs, nouns and so on.  It takes perseverance to memorize rules of conjugation and agreement.  It takes effort to read foreign language compositions outside of class to expand one’s vocabulary, such as the news or works of fiction. It takes dedication to seek out other foreign language speakers where one can practice speaking, especially when one is just beginning and is the weakest speaker in the group. It is not comfortable to learn.  But it is rewarding for those who stay the course.

And, sometimes there is enough desire and/or ambition, that one finally decides to also reduce and refine one’s accent.  Since each language’s pronunciation has its own mechanical formation in the mouth and facial mask that are related to its sounds, no two languages have exactly the same mechanics;  the tongue, use of the gum ridge, the degree one opens one’s mouth  –  all of these things are examples of mechanics that are unique to each language.

The Final Push Toward Perfect Pronunciation

By working with a native speaker and targeting certain sounds …to reprogram the mouth to speak a new language, you are making the new language feel as if it were your very own.  It is a level of mastery not everyone wants or needs to achieve. But is it right for you?

Do native speakers understand you when you speak?  Are you an actress?  Are you working in an English-speaking environment?  Do you simply want to associate with native speakers without the apparent idea that you come from a different place?  All of these are good reasons to work on accent and there are many more.  It might surprise one to learn that self-image is part of the transformation in reducing and refining accent.

As we decide to learn a language and make the first few attempts to say the words,  we discover a new person. We are used to hearing the old person speak, the one that speaks one’s native language.  But this new person sounds different, partly because of the new foreign language but also because our self-image takes a slight jolt hearing new sounds coming from one’s own mouth.  It is as if we had put on a mask to create another person. Now that the basics are mastered and pronunciation is the focus, the verbal repetition and practice becomes much more  important.  We begin to hear language more as a musician hears music, with all the subtleties involved that a native speaker employs to get the same effective native sound.

Of course, the subtleties of sound and of self-image interact to make the experience a bit heady and very personal – as one finds a new voice.  It expands who we are, as well as how we think of ourselves and how others think of us.  (One student had a boss that requested he take accent reduction.  When I met the student, I saw his word ‘will’ suffered a labored and clumsy pronunciation.  This student was managing others professionally and it made a real difference when he cleaned up that single word.)

Sounds that we make – make us who we are to a significant extent. As we change and refine accent, we introduce new sounds that are initially foreign-feeling. Naturally so. We (you) are actively inventing a new you in this new language experience, the same but new you.  Of course, this can be a liberating and stimulating experience.  But….

This can also be a maddening moment if there is a sound that is difficult for you.  For example, some Spanish speakers have difficulty distinguishing ‘B’ from ‘V’.  The mechanics are similar between the two and because we don’t often see the letter ‘B’ at the end of a word in Spanish so it is a challenge.  ‘Curve’ and ‘Curb’, are nearly indistinguishable for some Spanish speakers…  until they begin to become aware of the mechanics of each sound and the sensations each sound creates in the mouth.  Though the mechanics are different for each letter, they are similar enough to cause confusion.

Initially, the native speaking teacher repeats over and over again, the apparently easy utterance, while the student struggles to overcome his former habits, diligently trying to correctly repeat – until the student begins to feel a bit awkward.   All of this is part of the experience of accent reduction and it is totally normal (although initially upsetting if one does not know what to expect).  It is here that the student begins to dive down into the details of why the sound is not correct.  Believe me, this takes desire! And a teacher that can assist in breakthrough progress.

(A good teacher will help you understand how to change what you are doing as well as make you understand your experience is normal and correct;  rather than feeling awkward, one should feel good about making an investment in oneself that many others are too timid or insecure to try.)

Returning to our example,  there is an unmistakable feeling in the facial mask when we say ‘B’ that is not as present saying ‘V’ and the vowel that follows a ‘B’ gets a stronger attack on the release of a ‘B’ sound that ‘V’ does not produce.   This is because ‘V’ is a continuant (air continues to escape) and ‘B’ is a stop (air is completely stopped from escaping).   The ‘pop’ one feels is when the lips finally allow the air pressure to exit the mouth and this releases a burst of sound (and feeling) that is not nearly as strong when saying ‘V’.  Just like a musician, the speaker must ‘play’ both sounds and investigate the character of each before he can choose and reliably create the correct ‘B’ sound in the word Curb.

Experience is About Trust

Finally, Language On teachers will help you with specific exercises and ideas.   Recording yourself is useful both for sound and seeing the mechanics we are using.  We use many tricks to help you progress.  In English we speak about stress of words and syllables in order to sound like a native speaker.   More realistically, to sound native, one needs to understand both stress and de-stress, ultimately creating a voice-encoded contrast that provides not only a native sound but also verbal cues to a native listener that provide meaning and therefore better overall communication.

As an example, more specifically the schwa phonetic sound, which is a very short ‘u’ sound (as in the word ‘fun’) is very common in English.  We don’t really say BE-CAUSE but rather, Bu-CUZ or Bu-COZ;   note the very short first syllable ‘Bu’ where the u is meant to denote a schwa sound.  We hardly pronounce the first syllable of ‘Because’ in practice, almost as in ‘BCOZ’.

Conveniently, the schwa is about the same length as the release of ‘B’ at the end of the word ‘Curb’… which a Spanish speaker may virtually not pronounce at all or else pronounce like a V as in Curve.   (A ‘B’ at the beginning of the word is not so tough for Spanish-speakers but consonants at the end of words, especially ‘B’, can be very difficult.)

To give the student help, we combine the name ‘Bob’ with the word ‘Because’, by first introducing practice of ‘Because’ to get the ‘B’ and the schwa at the beginning of the word going in the mouth of the student.

After enough repetition, moving to Cur-Bu-COZ is just a short hop away from saying ‘Curb’ with the correct punch that only a good solid ‘B’ made using the upper and lower lips together can produce.  Practicing such things together means that we cannot feel embarrassed but rather should have the utmost trust between student and teacher.  With that support, speaking a foreign language like a native speaker is attainable and hugely gratifying.

Phew! That was a long article wasn’t it? If you have questions, you know where to find me! You can simply comment below or contact us to inquire about our accent reduction classes!