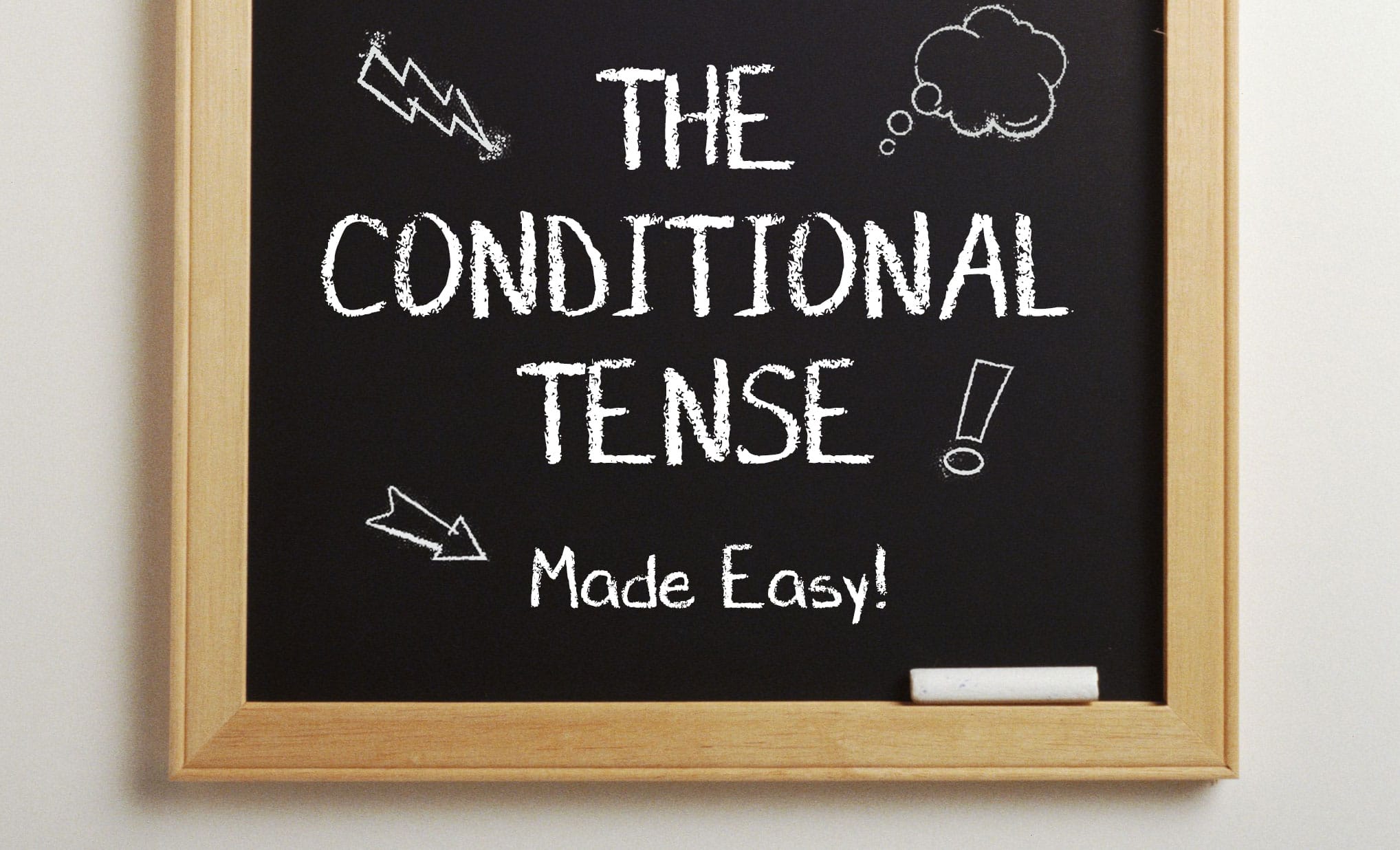 If you read this, you will understand more about the tricky conditional tense in English. That is my promise to you!

As is the case in other languages, when we speak in English we use the conditional tenses very often. “If” might be a small word, but it holds great meaning. Learning how to use the word “if” in English can be difficult, but I am going to make this easier by putting all, or at least most, of the rules onto one page.

Read on to learn about using the conditional tense in English.There are two kinds of conditionals in English: the real and the unreal. Remember this!

Below, I am going to break up the conditional into five different categories, often named the zero, first, second, third, and mixed conditionals forms.

What you need to know before we start
Make sure you learn the different verb forms, both regular and irregular. To view or download a list of common irregular verbs in English, click here.

Learn when to use the conditional tense!

We use the zero conditional to talk about a general condition or fact. Something that usually happens.

I live in Miami so my sentences below describe common conditions and/or facts about life in Miami.

We use when to describe a condition that is more frequent, usual or common. For example, if you live in London you might say, “When it rains, I take my brolly.” Or, “If it is sunny, I go to Hyde Park.” (PS. If you are wondering, “brolly” is short for umbrella in England.)

Common Mistake
Be careful not to confuse if and when. Although it might seem like a small mistake, it can be confusing and change the meaning of a sentence or even a whole conversation.
Can you write sentences with similar structure about your city? For example:

I know we shouldn’t stereotype and lump everybody and everything together, but if it’s in the name of learning the conditional tense then I think it’s okay, right?

We use the first conditional to talk about a real possibility.

I sometimes hear students using will in the wrong clause. Don’t say, “If it will rain, I will stay home.” This is not necessary, and it’s wrong! Rather, say “If it rains, I will stay home.” In this sentence, you don’t need will to show the future, as it is already implied by using if and is in the second clause.

Using am going to instead of will

You might hear a speaker say, “If I have time, I am going to visit that museum.” This is okay. There is a slight difference in the implied meaning. In this case the speaker may be planning to have the time. You can think of this as a “controlled condition”. The speaker may intend to make the time available.

Using the Imperative with the Zero Conditional and the First Conditional

We can also use the imperative with the zero and first conditional. The imperative is a mood, or form, that is used to give a command or a permission.

If you understand the zero and the first conditional, move on!

We use the second conditional to talk about an unreal possibility.

We use the past tense form, but we are not speaking about the past.Second Conditional Examples:

Use ‘were’ with all subjects, although ‘was‘ is commonly heard in spoken English.Common Mistake

The second conditional is often very difficult for students but it doesn’t have to be! It’s important to remember that we use the past tense to speak about things which we believe are impossible, unreal, or almost impossible. If you remember the form, and practice saying sentences using the second conditional over and over again, it makes it easier to form these sentences in speech.

As an English teacher, I do encourage you to always say “If I were…, If he were…” etc. But don’t be surprised if you hear Americans or other English speakers using was. English is always evolving and using was is becoming more acceptable.

When you are speaking, try contracting would, instead of saying it every time. It may be easier to say I’d, he’d, she’d, you’d, they’d, and even it’d rather saying would each time. In addition, native speakers usually contract would in speech anyways.

We use the third conditional to talk about an unreal possibility / condition in the past.

Just like in the second conditional, never use if + would + verb!

Another mistake that I hear often is simply not using the correct form. I think, this is a result of not hearing native speakers pronouncing each word clearly. In speech, native speakers normally contract both would and had into ‘d, for example, I’d, he’d, they’d etc. We also usually contract would have, could have, and should have into would’ve, could’ve, or should’ve, or even into would’a, could’a and should’a. The negative form of these are pronounced into wouldn’ve, couldn’ve, or shouldn’ve, or even into wouldna, couldna and shouldna. But today, isn’t the day to learn common contractions, or to study accent reduction!

Now you know how to use the main forms of the conditional tenses in English. So, you’re done, right? No, unfortunately life is not that easy. If it were that easy, I wouldn’t be writing this blog and you wouldn’t be reading it either. I’d be sitting in my cabin in the mountains. What would you be doing?

Now we have to learn and practice mixed conditionals.

There are a few forms or ways we can mix the conditionals. Look at the examples below to study some mixed conditional structures.Past Condition

If she had been sick,…

If I had used sunscreen,…

If I were taller,…

There you go! We are done

If you hadn’t continued reading, you wouldn’t have finished and you still wouldn’t understand how to use the conditional tenses correctly.

If you still have any questions, don’t worry just ask! We are here to help you learn English fast.