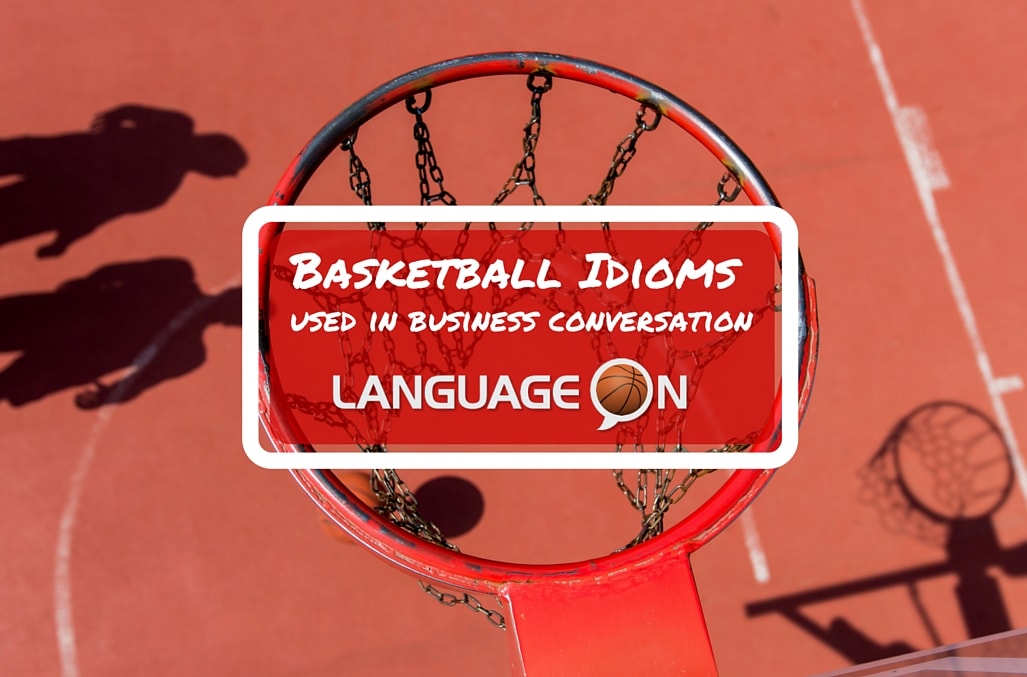 Basketball Idioms Used in Business ConversationLearn common idioms to use in business conversations. Idioms are used in almost every language and they’re very important to study when learning English. We often use idioms in English and today you will learn some common American idioms from the sport of basketball, and read examples of these idioms used in business conversation.

Throughout the article I have underlined some words, idioms, and phrases which I think might be important for you. Read on to see their definitions and explanations.

It’s that time of year again, March. What does March mean? Technically, many things, but most of all it means it’s time for “March Madness.” For our friends from outside the USA, March Madness is used to describe the NCAA Men’s Division I Basketball Championship, or in layman’s terms, a tournament for our college hoops teams nationwide. Sixty-five of the best college basketball teams from across the country compete in a grand tournament (you lose one game, you’re eliminated) until there is only one remaining. If you’re reading this post and it’s another time of year, that’s fine. Keep calm and read on!

What does any of this have to do with English and idioms? Well, that’s simple. It’s a great time to teach you some common idioms used in English. The idioms below all come from the great sport of basketball, invented in a tiny town called Springfield, Massachusetts, originally with the intent of conditioning young athletes during the cold weather season. Wow, you see what’s happening here? Learning! Keep going, read on! Before you know it, you will be using some of the following idioms in business conversation.

There are many common idioms used in business conversations, but today we’re going to focus on common “basketball” idioms. These idioms can be used when discussing many different things, not just business. Why are we only teaching “business” idioms? Well, you’ll have to ask the google SEO trolls that question… shhhh!

Literal meaning: a type of shot where a player forcefully throws the ball down through the basket; an easy type of shot (only if you are tall enough insert smiley face)

Figurative meaning: a sure thing; something that cannot fail

Idiom used in a business conversation, albeit a very casual one:

going to roll it over into an equity indexed annuity and earn a fat commission.

Insurance agent 2: Wow, that sounds like a slam dunk. Good for you!

Insurance agent 1:Remember that lady I was telling you about?

Insurance agent 2: Yeah, have you bought your boat yet?

Insurance agent 1: No, it wasn’t a slam dunk after all. Turns out her son’s friend works

for Fidelity and she’s going to give it to them.

Figurative meaning: to give something or someone your full attention

Sales Manager addressing her team on a Monday morning:

We can’t afford to lose Premium’s business. They are our biggest account and could

really could make or break our sales this year. Let’s stay on top of them and give them the full court press.

Literal meaning: when the ball bounces off the rim or the backboard

Figurative meaning: when something or someone is “on the mend,” recovering from an

Wow, look at Premium’s growth this past quarter.  After last year’s dip in share price, they

seem to be on the rebound. I think now’s the time to buy.

Literal meaning: a shot scored immediately before the buzzer or whistle signaling the end of the game.

Figurative meaning: to accomplish something at the last minute; to have a success or finish a project just before a deadline

Premium account. They liked it and have agreed to continue. Phew! That was a real

That’s it for today! Four “basketball” idioms to use in business conversation. Why only four? Because two’s company, three’s a crowd, and four’s a party… and five’s just too much for me, and probably you too right now!

Below you will find the definitions that I promised.

hoops: used in this context, it is slang for basketball

keep calm and read on: derived from “keep calm and carry on”; This slogan was a motivational poster produced by the British government in 1939. It is commonly used in different forms and variations.

figurative meaning:  to describe something by comparing it with something else

albeit: a conjunction meaning although

roll it over: in this context it is used to mean transfer money from account to another

fat commission: in this context, it is used to mean a large amount of money(….. Ahhh so this is it’s figurative meaning. Yes, you’re right, now carry on!)

turns out: in the end; finally

make or break: to be a success or be a failure

stay on top of: pay special attention to someone or something

backboard: And another picture! > click here! (Yes, it’s because I am tired of typing. Some call it laziness while others call it efficiency.)

dip: used in this context it means a drop or fall

two’s company, three’s a crowd: a common idiom used to mean that two people is the perfect number, commonly used to indicate that the speaker wants to be left alone with somebody else

If you would like to have any questions or would like to add some more basketball idioms to use in business conversation, just comment below and I will be sure to answer you.

Have a nice day!