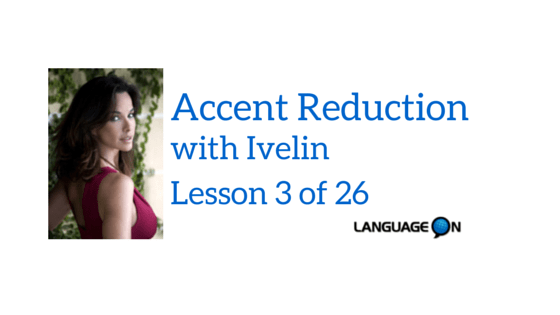 Ivelin had her 3rd accent reduction class last week and her improvement was incredible. I could immediately tell that she had be working hard with her accent and was starting to understand the importance of stress patterns in spoken English. She remarked that it was getting easier for her to understand English speakers as she was becoming more aware of the stress patterns.

For homework Ivelin had been learning about syllable stress.  Let’s listen to Ivelin read the same words as she read at the end of her second class class. Make sure to compare it to how she sounded when reading these same words last week.

They sound different right? What is she doing? Well, she is stressing the main syllable in every word. Today I am going to give you two more important tips.

There are many words in English ending in -ate, and they are very difficult for many speakers of other languages to say. The reason for this is that many of these words are almost the same in many other languages. In many other languages the stressed sound, or syllable in these words is pushed to the end of the word. In English, it is usually at the beginning, or two syllables before -ate. Let’s listen to Ivelin reading the following words in English and in Spanish. You can clearly hear the difference in the stress pattern. The stressed syllables are underlined.

Although we will still need to work on some of the vowel sounds, Ivelin is doing an excellent job! During the next class I will also teach her the difference in pronunciation when using some -ate words as nouns or adjectives, not verbs. Listen to me reading a few sentences using some -ate words in different forms.

We usually alternate. That is the alternate

I associate with him. He is my associate.

She wants to graduate. She will be a graduate.

Can you hear a difference?  The -ate is pronounced as /It/ when it is a noun or adjective, the sound is usually shortened or reduced and it sounds like “uht”. nouns.

Note: Many -ate words become a noun ending in -tion. When a noun ends in -tion, we usually stress the a syllable before the suffix ‘-tion’.

Remember when I asked you to read these two sentences last week?

“There was an object in the way.”

That was because in English we have many two syllable words which can be used as a verb or noun, for example: a project, to project. We usually stress the nouns on the first syllable and the verbs on the second syllable. Practice the words below stressing the capitalized vowel.

Over the next week Ivelin will be practicing, practicing, and practicing!  The hardest part about reducing your accent is not learning the rules, but finding time to practice. You should be trying to use these tips for accent reduction EVERY TIME you speak English, not just in your class.

Turn Your Language On!