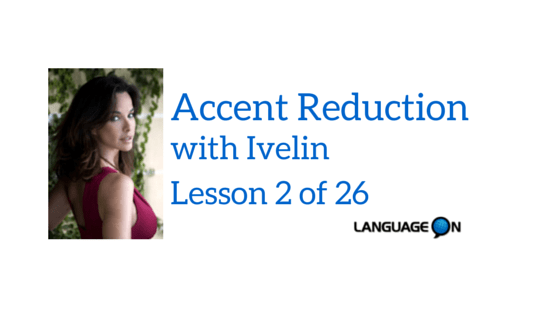 How does Ivelin sound a week later?

Happy Mooonday folks! There is no better time than now to work on a little bit of accent modification.  Ivelin had her second class yesterday after a week of studying on word stress patterns. Some of the things that Ivelin studied were the different stress patterns when it comes to adjectives, names, numbers, acronyms, compound nouns, phrasal verbs, and abbreviations. Most importantly, she practiced every day and it is easily noticeable when you compare how she sounded a week ago to how she sounds now.

Let’s listen to Ivelin read the same paragraph as she read in her first class. Make sure to compare it to her first recording.

Did you notice any differences?  I sure did. Good work, Ivelin!  Now, let me explain some of the other rules and techniques that Ivelin worked throughout the week.

He picked her up. George drives a pick up.

George dropped out.  He is a drop out.

She was turned off. That is turn off.

A compound noun, or a “two word noun,” is made up of two words.  Sometimes they are separated and sometimes they are written together. We usually stress the first word in such a pair.  Read the following words, stressing the underlined words.

By this point, you are probably starting to hear the stress in sentences, expressions, numbers and acronyms.  We could go on all day giving you rules and exceptions, but I would rather encourage you  to start listening for stress patterns on you own.  Just knowing the rules will not help you reduce your accent!

*General Stress Tips: Listen for stress in acronyms, abbreviations, names, and numbers. Is the stress pattern different than in your language?  How would a native speaker say the following:

Syllable stress, sometimes called secondary stress, is an elongation of one vowel in the stressed word. Many languages give equal emphasis to every syllable, or put a stress or accent mark if one syllable is stressed more than another. Almost every word in English that is more than one syllable has a “dominant” syllable. You must pay special attention to the syllable stress within the content word.

You can really hear this when you compare the way she pronounces Ivelin and Cuba in both recordings.  In the second recording she draws out the first vowel in each word, saying “iiivelin” and “Cuuuba”.

Why does she do this, one might ask? The answer is that in English we usually make one vowel longer in words with more than two syllables. This is very important as it can even change word. Read these two sentences.

“There was an object in the way.”

“I object your Honor.”

Do you pronounce the word object the same in both sentences? If your answer is yes, you are pronouncing them incorrectly.  If your answer is no, then why are they different? Are there more words like this? Well, this is what Ivelin will be studying over the next week, and so should you.  We will give you some tips, rules, and techniques for syllable stress in our next post, so make sure to sign up to our newsletter.

Over the next week Ivelin will be learning about syllable stress.  Listen to Ivelin’s next recording.  What do you think? Is she pronouncing these words correctly or not? Why or why not?  We will find out more next week.

Listen to Ivelin read some difficult words.  Make sure to come back next week to find out if she has improved.

Until then, keep practicing If you need our help or are interested in accent reduction lessons, don’t hesitate to contact us!

Turn Your Language On!